FusionAuth can be run in multiple architectures; see the Server Layout documentation for more.

Before you cluster multiple servers or containers running FusionAuth, prepare your environment. In addition to FusionAuth, you’ll need the following components:

This infrastructure must be created and managed when operating a FusionAuth cluster. However, this setup is beyond the scope of this document.

These instructions assume you have a load balancer, optional Elasticsearch server, and database server already configured.

When building a FusionAuth cluster, consider:

Install FusionAuth on each of the servers or containers which you plan to run. You can install the software via RPM, DEB, zip file or any of the installation methods.

Build your FusionAuth configuration. Double check the following settings (these are shown as the configuration file keys, but the same settings are available as environment variables or system properties):

Distribute your FusionAuth configuration to all nodes. They must all have the same configuration. You can do this by setting environment variables, Java system properties, or by pushing the fusionauth.properties file to each server. If you have a password hashing plugin, make sure it is distributed or available to all the nodes as well.

Restart the instances to ensure configuration changes are picked up.

Add the instance addresses to your load balancer. If you are terminating TLS at the load balancer, proxy the http port, otherwise communicate over the TLS port. Both of these are configurable, but they default to 9011 and 9013, respectively.

Configure the load balancer to forward the following headers to FusionAuth:

You can see community submitted proxy configurations in the fusionauth-contrib repo.

You can learn more about FusionAuth and proxies here.

If you have difficulty installing FusionAuth in a cluster, you can set up a cluster with one node. Set up your load balancer to point to only one server, and get this working before adding any other nodes. This will narrow down any issues you may encounter.

Verify that the installation is clustered by navigating to System → About. You’ll see multiple nodes listed: 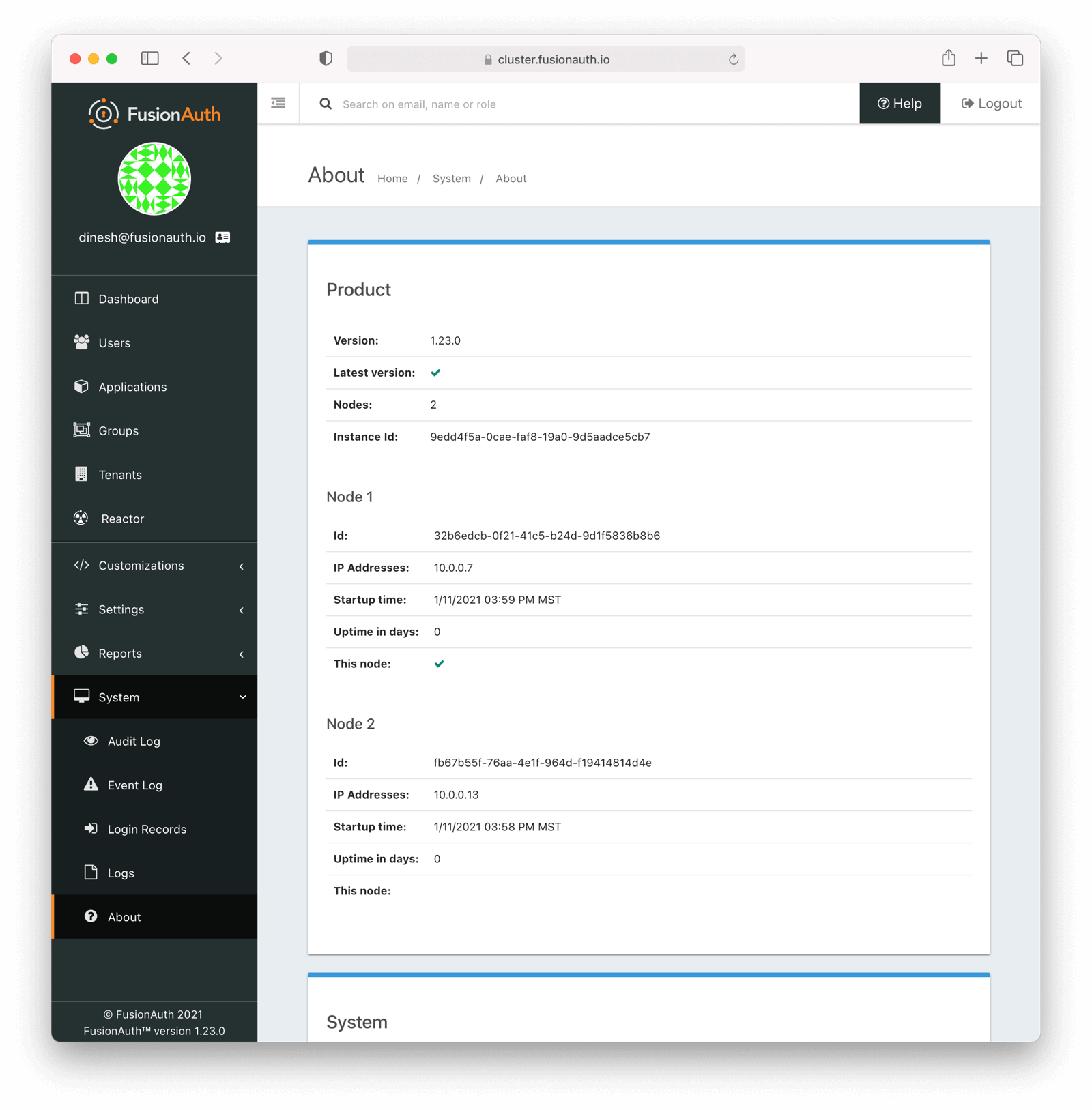 The node which served the request you made has a checkmark in the This node field. Node 1 served the above request.

You may see incorrect IP addresses for each node if you are using a version of FusionAuth prior to 1.23. This bug doesn’t affect clustering functionality. All other information about the nodes is correct.

While ssh access to each node is helpful for initial installation and troubleshooting, you should not need it during normal cluster operation. Modify your firewall accordingly.

You may also lock down the FusionAuth nodes to only accept traffic from the load balancer, so that all HTTP traffic goes through it.

If your load balancer supports health checks, call the status API. A GET request against the /api/status endpoint will return a status code. It’ll either be 200 if the system is operating as expected or non 200 value if there are any issues with the node.

Available since 1.27, you can use a Prometheus endpoint to monitor your instances.

You can ingest the system log output, event logs and audit logs into a log management system via API calls.

Should you need to review system log files in the administrative user interface, you can see those by navigating to System → Logs. Logs for all nodes are displayed there.

See the Troubleshooting documentation for more information about logs.

To add more nodes to the cluster, do the following:

Here’s a video covering how to add and remove nodes from a FusionAuth cluster:

Each node regularly updates the shared database by updating a row with URL and timestamp information. If a node does not check in, after a certain period it will be removed from the cluster, as far as FusionAuth is concerned.

While a node is removed from FusionAuth’s node list, it will no longer participate in the FusionAuth cluster actions as mentioned above.

This automated removal does not affect load balancer traffic. The load balancer, typically by using a health check, must stop sending a node authentication traffic if it is unhealthy.

How Many Instances Should I Run?

To determine the number of nodes to run, load test your cluster. Usage, installation and configuration differ across environments and load testing is the best method to determine the correct setup for your situation.

System upgrades require downtime. This is typically on the order of seconds to minutes.

In general, the process for upgrading from version 1.x-1 to version 1.x is:

The recommendation is that you automate the process and minimize downtime. For FusionAuth Cloud we use a configuration management tool and see downtime on the order of seconds for multi-node instances.

You may also, if you are in an environment with a load balancer and creating nodes is easy, follow this process:

There’s an open issue for n-1 version compatibility. Please vote that up if this is important to you.