This feature is only available in paid plans. Please visit our pricing page to learn more.

Connectors allow you to connect other sources of user data to your FusionAuth instance. Once the connection is created, you may either:

The following Connectors are currently available:

Find the FusionAuth Identity Providers in the administrative user interface by navigating to Settings → Connectors or use the Connectors APIs. 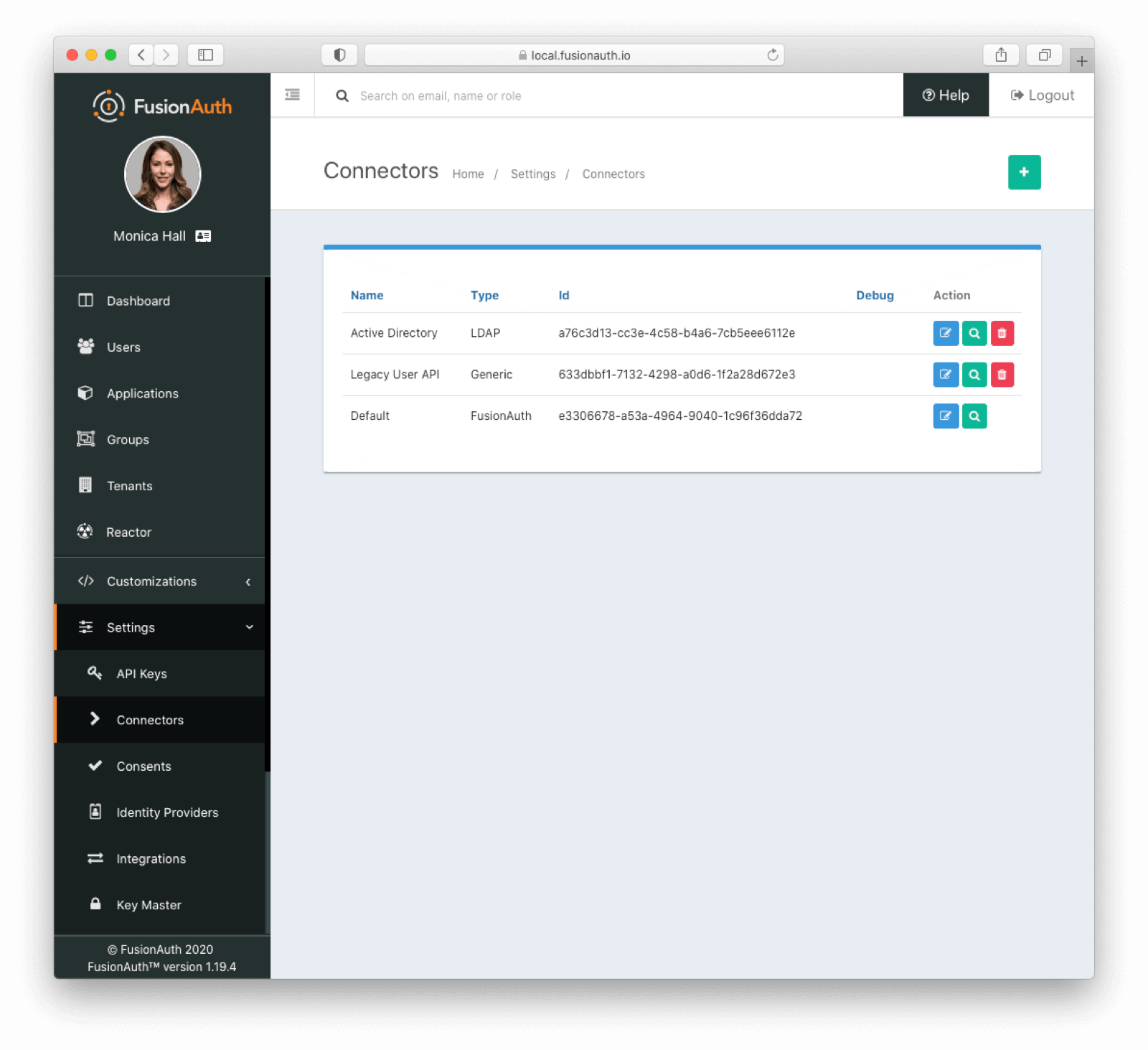 Using a Connector for authentication alone results in similar functionality to using the data source as an OIDC Identity Provider. Subsequent logins continue to use the external source as the System of Record, including for user data such as registrations and group membership.

In contrast to the typical usage of an Identity Provider, with a Connector the user doesn’t choose their identity provider; the administrator does. (Though an administrator can use the idp_hint parameter to force certain Identity Provider.) In addition, if the data source contains additional user profile information, a Connector allows you to map that into your user object. Finally, the identity data provider doesn’t have to implement the OIDC or SAML specification.

Using a Connector for authentication allows you to use an external user management system as another data source for FusionAuth. If the data source can speak LDAP or HTTP, you can authenticate users against it.

The user will be placed into the same tenant as the application they are authenticating against.

If you are authenticating a user, you must provide the following fields in the user object you return.

In addition, ensure that the same user.id is returned each time a user is retrieved. If you have an LDAP attribute in the form of a UUID or a value that can be translated to a UUID, using that attribute or its translation is recommended. If you have to generate a UUID, ensure that you are able to return the same value each time the user authenticates. Doing so ensures that FusionAuth knows which user is being referenced, even if the username or email address changes.

If you are authenticating a user, you likely want to populate these fields:

Using a Connector in this way allows for a phased migration. Let your users sign in and migrate their data as they do so. All changes to user data like group membership should then be made in FusionAuth. You can run the old system for a time, then shut it off and remove its configuration, then relying on FusionAuth for all user authentication.

The user will be placed into the same tenant as the application they are authenticating against.

If you are migrating a user, you must provide the following fields in the user object you return.

If you don’t have a UUID to associate with this user, you may create a random one, as the source datastore won’t be consulted after the user is initially migrated.

If you are migrating a user, you likely want to populate these fields:

Connectors can be enabled on a per tenant basis. This is done with a Connector policy. These may change over time.

In the following screenshot you will see that we have enabled two custom Connectors for the Default tenant. The default Connector is present as well. 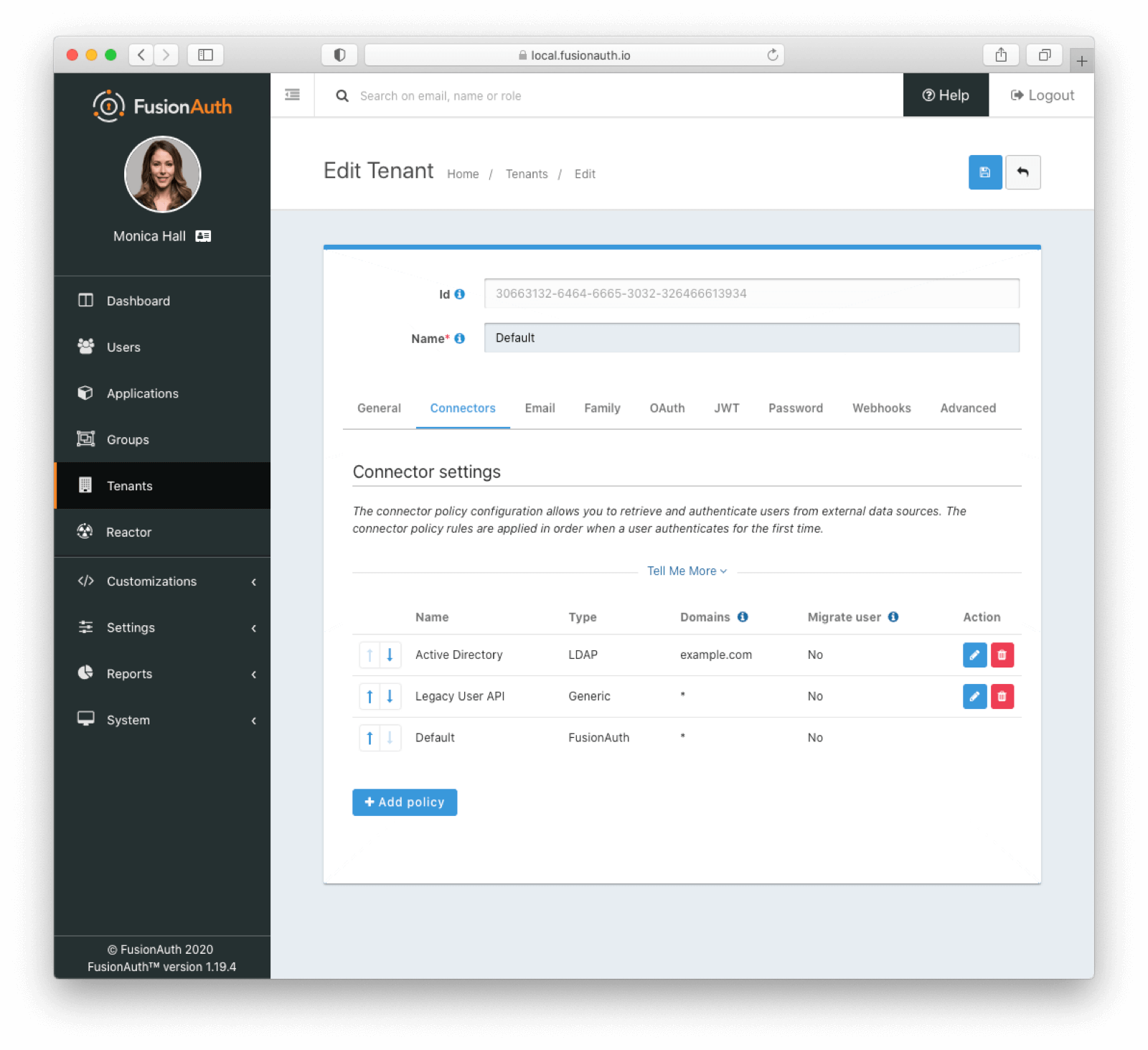 The order of operations matters for Connectors. The Connector policy rules are applied in order when a user authenticates for the first time.

A domain may be either be the string * in which case the Connector policy applies to all users, or one or more valid email domains such as example.com or piedpiper.com. If more than one domain is entered, they must be separated by newlines.

Connectors share many features with Identity Providers. Both can connect FusionAuth to an external system of record for user identity.

How can you decide between them? While they each have strengths, these questions may be helpful in choosing: